by
Playing 4 Keeps
By Sara Vogel
By now, many of the middle schoolers at GK’s Playing for Keeps program at Global Neighborhood Secondary School in East Harlem know the steps of the game design process: they’ve brainstormed ideas, drafted game design documents, made paper prototypes and flowcharts, tested out their ideas, and used the program Scratch to code their games or have used Gamestar Mechanic to design them. On June 3, there was one last step: show off!

Sixth, seventh, and eighth grade game designers came together to present their games for change to their classmates, teachers, and administrators at the school. As students discussed and discovered throughout the semester, while the video games they most often play are entertaining and fun, games can also convey social messages, demonstrate a point of view, and raise awareness about global and local issues.

Guests had a chance to check out students’ formal presentations, could browse posters the students made about their games, and playtest the finished products (or in some cases, works in progress). 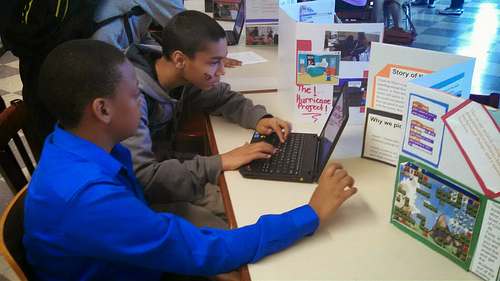 The Scratch games presented included “Journey of an Immigrant Kid” by seventh graders Malak and Aya, who themselves immigrated from Yemen and Egypt when they were younger. They used the game to explore a local angle on the issue of global migration. Their game stars a 12-year old recent immigrant who must navigate the school cafeteria, avoiding bullies who say negative comments about how she speaks English and the hijab she wears. She can boost her self-esteem by collecting positive comments. 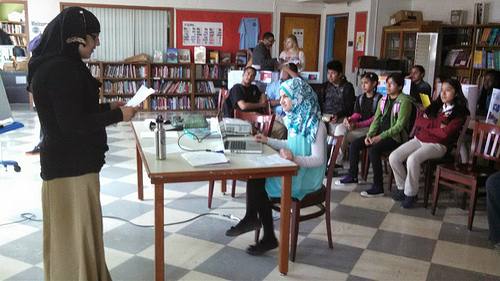 Their classmate, eighth grader Mark, created a version of the game on Gamestar Mechanic which in many ways shadowed his own experiences arriving from the Philippines at the start of the school year. His game involves talking to intolerant classmates and educating them about immigration and immigrant rights. He included several facts that he had researched. 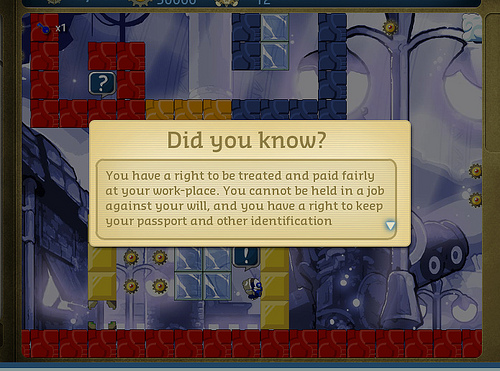 Check out Malak and Aya’s game on Scratch!
Other games:
Don’t get caught by the bullies by Max and Anthony
Animal Abuse game by Jenaya and Jojo

Global Kids is excited to continue our partnership with GNSS in the Fall, and can’t wait to see what the students come up with next.