by
Uncategorized
By Ryan Waingortin
Youth between the ages of eleven and seventeen attended the Global Kids Maker Party where they experimented with circuitry using LittleBits modules. Attendees learned the meaning of “input” and “output” circuits through various design challenges given by Maker Party facilitators. These initial challenges built up to a final challenge, in which participants created “gadgets” that would improve a particular room of one’s home. Youth collaborated with their peers over a few slices of pizza and completed brainstorming activities that led to the successful creation of the aforementioned gadgets. Notable creations include a remote control that would program the cable box of a television using light sensors, a garbage disposal mechanism, and a music player for one’s bathroom. 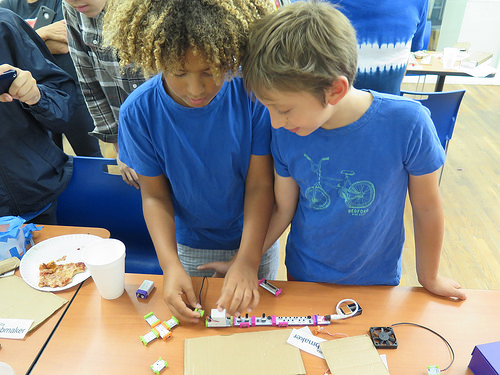