by
NYC Haunts
By Sara Vogel
You don’t need a time machine to experience the past. That’s what students at the High School for Global Citizenship and the School for Human Rights found out this semester as they created their own location-based games for GPS devices that drew on local history and made connections to larger global issues, such as protection of the right to equality before the law, as stated in Article 7 of the Universal Declaration of Human Rights.

Stroll down to the housing complex across the street from Jackie Robinson School in Crown Heights with your cell phone or tablet and load up the TaleBlazer app. By playing the student-produced game, you’ll learn that if you were at that spot five decades ago, you would have seen Ebbet’s Field– the Brooklyn Dodgers home baseball field where Jackie Robinson broke the color barrier in Major League Baseball. Playing as Jackie Robinson, you’ll be faced with racist, dehumanizing situations as you visit all four bases of the baseball diamond and attempt to score a home run. You must make decisions in character. As is noted in the game, Jackie Robinson is just one of many who faced discrimination on the basis of race over the years. Article 7 of the Universal Declaration of Human Rights protects people around the world from such unlawful treatment by ensuring that “all are equal before the law and are entitled without any discrimination to equal protection of the law.”
On the day of the final playtest, student game-designers presented their game in front of their peers and staff from Global Kids and the Brooklyn Public Library. 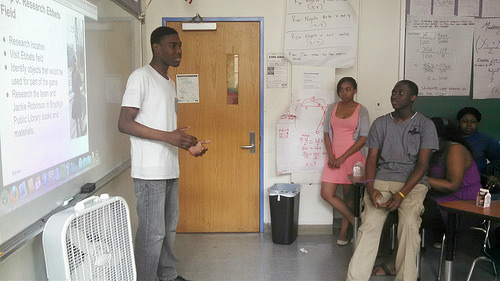 They discussed game play, the game design process, and some of the challenges they faced in designing the game.
Share: