by
Playing 4 Keeps
By Melissa
Students at SIS were joined by middle schoolers from around the city to take part in Global Kids’ signature “Playing for Keeps” program. They used MIT’s open source video game design software,Scratch, to program and design games about environmental issues ranging from pollution (“Pollution’s no Illusion” by Jayme, Julisa and Summit) to habitats (Wildlife Takeback by Robert, Gabriel and Patrick). It was an exhilarating week of hands-on activities that exposed students to the elements of a game and content about population density supplied by NASA. All throughout, students kept blogs documenting their learning. 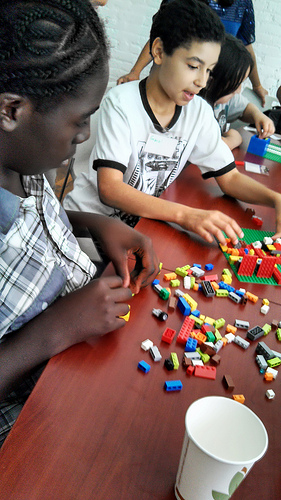 Students completing a Lego Challenge where they have to create an immage based on a story that they were assigned.
​On the first day of the program, after a warm-up that involved representing movie plots with legos, the students learned to name the core elements of a game by identifying those elements in classic games such as Rock, Paper, Scissors and soccer. They chose specific elements of a game that they wanted to change, and noticed how their jams affected game play. They were also introduced to Scratch and learned basic functions using the Scratch Program.
Share: