by
NYC Haunts
By Melissa
Our SIS students are officially GPS game designers! This week was packed with activities all leading up to a presentation at the Weeksville Heritage Center where students from the School for Human Rights playtested the new game.

There was lots of work to do to prepare. On the 5th day of the program, students split up into groups to work on developing characters for the game. They referred back to the history they learned at the Weeksville Heritage Center and week 1 workshops. They decided what roles to give each character and the items each character would give to the player, and began writing the characters’ dialogues. At the end of the day they presented their character’s dialogues, even dressing up a bit and playing the part. They each shared what worked and what needed improvement about the other groups’ dialogues and provided strong feedback for their peers. 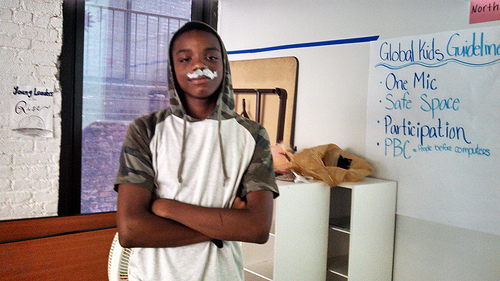 Robert in costume and reading the dialogue of the Freedman Reggie Colson
On the 6th day, the students revised the rough draft of the dialogue in groups, adding more historical context and even some 1800’s slang. Their creativity was put to the test! At the end of the day the students connected the Draft Riots to other modern social issues of their choosing: the Trayvon Martin case, hate crimes, and the work of Malcolm X were the three topics students were most interested in exploring. ​ 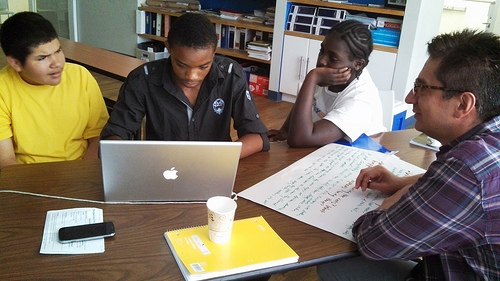 Students adding more historical context and content to their dialogues. 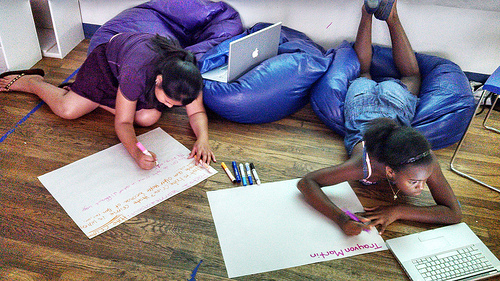 Jayme and Julisa do research on a modern day social issue connected to their game.
On the 7th day, they finalized their dialogues and put the last minute touches on their game. They playtested their game in the office using the quicktravel option on ARIS. Content with the results of their finalized game, they began preparing to present their game at the Weeksville Heritage Center the following day. They learned to keep in mind things such as eye contact, pace of speech, volume of speech, and body posture. They were very encouraging and supportive of each other when practicing their speeches giving feedback and constructive criticism when necessary. 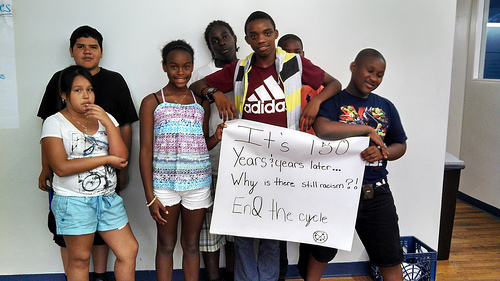 Students relating the Draft Riots to racism and hate crimes today.
Finally, the big day had arrived! The students traveled to the Weeksville Heritage Center where they presented their game to middle schoolers from the School for Human Rights. They talked about the Civil War, Draft Riots, connections between that time and current day issues, and how to use ARIS. When it came time to play the game, they became leaders, helping other students easily maneuver through the game, despite the heat wave! They made some new friends and enjoyed playing the game they worked for two weeks to create. 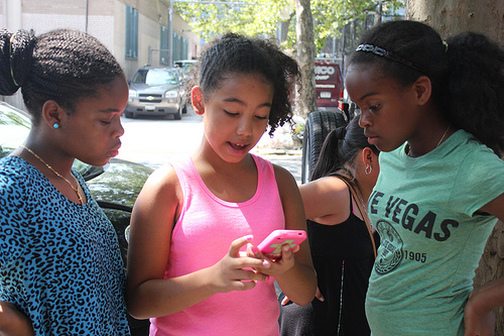 At the Weeksville Heritage Center playing the game created by SIS students
NYC Haunts was a great experience for both the students and the facilitators. Thanks in part to one of the funders on the project, TimeWarner Cable, the students were exposed to something they were not familiar with before and were able to successfully create a game that others could play and learn from. The students also became more comfortable with each other and made new friends along the way. It was an enriching experience that I could see the students wanting to do again.
Share: