by
Uncategorized
By Juan Rubio
This past Saturday May 19, Global Kids in collaboration with the Brooklyn Public Library and The Hive Learning Network NYC conducted a game jam based on the popular game Minecraft and the equally popular books The Hunger Games.

We wanted to show a short video of the game as it happened in Minecraft and some pictures. We will publish a more complete video in the near future with all the participants, including interviews with the youth and partners in the program.  We wanted, however, to acknowledge the success of the program soon after it happened. Click read more to learn more about what took place during the day.

Gathered at the Main Branch in Grand Army Plaza, teens from two internship programs from the library participated in the day long game jam. The program was developed with the assistance fromMinecraft Edu who created a world in Minecraft to represent two sectors as depicted in the books: The Capitol and District 12. After the youth learned in a quick tutorial the basics of crafting, they began playing the HungerCraft game. In the game, two groups were divided and given the roles of being in The Capitol or District 12. Having unequal amount of resources, but needing from each other to survive, the groups engaged in a game that involved trading, strategy and crafting skills. This mechanic provided the group to later have a lengthy discussion about inequalities and imbalance of resource in societies past and present. The youth discussed The American Independence War, The American Civil War, and the French Revolution. They also spoke about current events in which power struggle has been present such as the Arab Spring and conflicts in Africa. The youth were engaged, enthusiastic and had lots of fun in the program. 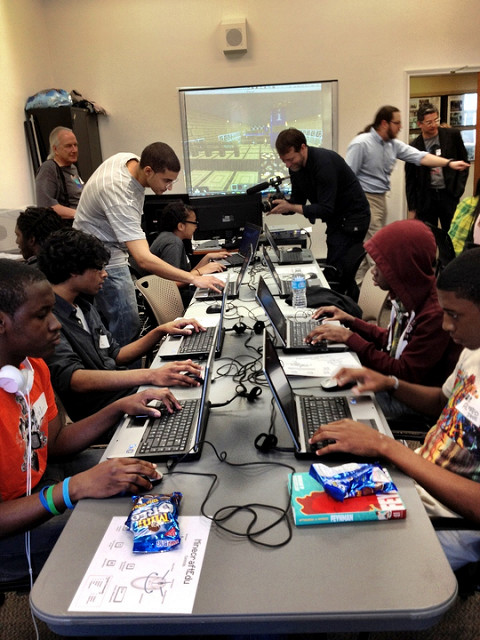