by
Hive Learning Networks
By Juan Rubio and Zac Rudge
Hive Youth Meet-ups are 3-hour events that include a workshop facilitated by a Hive member organization, three youth presentations, and time for socializing, both amongst youth and organizational representatives. Below are reflections from two members of the planning team around the inspiration, design, and development of the event model. Juan Rubio is Associate Director of the Global Kids Online Leadership Program. Zac Rudge is Citywide Outreach and RecYouth Coordinator at the Parks and Recreation Computer Resource Center (CRC) program.
Juan’s Perspective 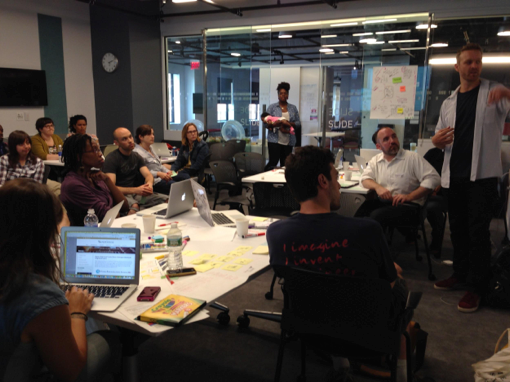 ​The Hive Youth Meet-up idea started with a conversation I had with Dixie Ching about youth pathways. She was interviewing me for her research on the topic and I told her that for me the Hive Learning Network represented an opportunity to learn from other professionals like me, form collaborations with others working on the same field and same goals. I mentioned to her that it would be great if we could create the same experience for young people. She liked the idea and encouraged me to develop it. She included me in a design charrette where some ideas were presented to Hive members and I explained the concept and intention behind the Hive Youth Meet-ups. At that design charrette, the idea of forming a meet-up for Hive Youth gained interest from other organizations and a working group was formed to develop the project.

I had seen some efforts to create youth groups at the Hive before, but I thought they were very adult-centered and sounded as if the kids had to make a big commitment to be part of them. My idea was to create a space where they would feel at the center of the event: an experience produced by them and where they could showcase their involvement in Hive programs. I was also interested in creating a space where young people could form bonds with each other and explore possible collaborations.
A key component of the Hive Youth Meet-up model was the design process that took place prior to its implementation. At the design charrette, I was able to form a group of Hive professionals who were interested in developing and implementing the idea. It was then that Erica Kermani from Eyebeam, Chris Amos from Carnegie Hall, Zac Rudge from CRC Parks and Rec, and Brian Cohen from Beam Center formed the core group to plan and design the first HYM, with assistance from Hive Research Lab. Thinking back to this point in time, I think the design charrette helped me recruit members from Hive organizations that were supportive of the idea of youth meet-ups; I also now had a group of people committed to providing input and helping me develop out the model. I was able to secure some funds through Mozilla and we started planning and implementing the meet-ups.

Another key component of the meet-ups was the assistance and guidance provided by Rafi Santo and Dixie Ching on the design and evaluation of the program. Their input was extremely helpful as we began to develop the program because we were being intentional about the goals we had in mind and the strategies we would implement to achieve those goals. You can read their excellent write up of their process here.

After meeting a few times and deciding on the model to use, we had our first meet-up at Beam Center in Brooklyn on a Sunday. We were expecting to have a good number of kids but the attendance was low. However, there were 3 youth presentations: one from a film program at the Brooklyn Public Library, one from Global Kids’s Playing for Keeps, a game design citywide program, and one from Eyebeam’s Playable Fashion. I would say that having that first meet-up was also crucial for moving forward and having a better model in place. We met again to reflect on the first meet-up and plan for the next one. Based on the observations from that first meet-up, we decided to have a workshop that was more interactive, and would be held on a weekday in order to increase attendance, and to have young people be the emcees.

Last summer I sat down at a table with a group of people that I had never met. Representing the Parks and Recreation Computer Resource Centers, I was at a design ‘charrette’ (the meaning of which I was also slightly unsure) to talk about youth trajectories, something that was familiar to me, having worked in the youth development space in a number of different time zones. I was also hoping to build relationships with organizations that could support the CRC to creatively meet the needs of young teens that we worked with. I remember Dixie Ching, who was leading the process, asking if I had brought a computer (no), and generously providing a machine for me to tap away on. I had attended a few Hive meet-ups, and was starting to recognize some familiar faces, but this was my first time getting down to the nitty gritty—actually talking and working through new ideas with people.

As the workshop got going, I remember Juan Rubio introducing the idea of a Hive for teens. Though I was still working out what the Hive for adults was all about, a teen version seemed like a very simple, clear, good idea. Thinking about the needs of teens that the CRC works with, and coming from many years working for a youth-led organization, I was immediately struck by the value of having greater opportunities for Hive-affiliated teens to get together, share and test ideas, learn new things, and to begin the process of developing pathways into the Hive itself through leadership roles in the ‘youth version’ of the Hive. That day it seemed like we had planned it all out (we hadn’t), but from there Juan, with the support of Mozilla and the Hive organizations who participated in the discussion that day, managed to secure just enough funding and organizational social capital to test the idea out.

By organizational social capital I mean the people and organizations who agreed to jump in, without any significant financial input, to road-test the idea: Erica Kermani at Eyebeam, Chris Amos at Carnegie Hall, Brian Cohen at Beam Center, Juan Rubio at Global Kids, and Dixie Ching and Rafi Santo from the Hive Research Lab (HRL). Rafi and Dixie deserve a special mention here—their support has been invaluable, particularly in relation to outcome measurement, but also simply by virtue of their energy and support for the project—shout out to Rafi and Dixie!
We officially started the planning process in September, with the idea of holding three events to test out the model and we are now two Hive Youth Meet-ups in (we found a name, though it may change!), and the momentum is building. Generally speaking, our goals were to help teens build relationships, pick up new skills, and learn about resources and opportunities in the Hive. In a  way, we hope Hive educators will find HYMs to be a useful mechanism to get the word out about programs.In the spirit of prototyping and iteration (more new terms I was to become comfortable with through this process), we have designed a strong model that aims to, in simple terms, be a version of the Hive for teens. However, as well as achieving what we set out to achieve, there were a few unexpected outcomes (good ones).
​
Our first HYM, in November at Beam Center, was a chance to test out the initial idea. There were a few bumps (we held it on a Sunday, which everyone after the fact agreed was a bad idea), and some of us completely missed on our commitment to get participants to the event (yes, that was me). However, the event supported our con
cept—the fundamentals were right; we just needed to tweak it a little. Participants were led through an introductory workshop using Python and Raspberry Pi, which gave a great view into the world of CPUs and code. We had some great presentations from teens, and strong question and answer sessions. 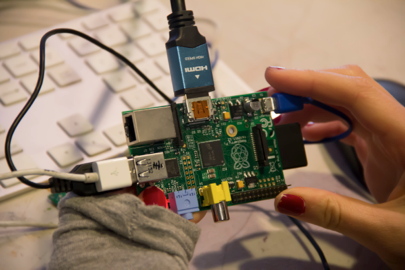 Even though we all considered it a good start, a few tweaks were needed. We found ourselves stumbling over exactly how to explain what “The Hive” was, and aimed to find ways to streamline our messaging. We added in a goal, aiming to specifically target teens 14-19 who didn’t know anything about Hive, and we added a long term goal of creating a core group of HYM youth who would, over time and through experience, collaborate and form social ties with each other, and act as Hive Ambassadors as they supported the implementation of the HYM initiative. On this point, we aimed to bring in a stronger “youth voice” at the next meet-up, both in the planning and implementation of the HYM. Out of this reflection we also ended up identifying the key roles that could make a HYM a success. These included an adult and a youth emcee, a workshop facilitator (this could be co-facilitated by adults and teens initially, with teens stepping into the role as their experience progressed), educator/observers from partner organizations, a Hive brokering coordinator, an event manager, and youth documenters (i.e., photographers).
By the time the second HYM came around in late January we felt like we had a good plan in place, with all bases covered, but you really never know in these situations. However, from the moment that Radio Rookies kicked off the event with an excellent podcasting workshop, asking teens to talk to each other about their first crush, everything went perfectly. There was great teen engagement in the workshops and the presentations, with lots of conversations and back and forth between the teens who attended. The Kickflip Program, Brooklyn College Arts Lab, and young CRC filmmaker Tay Pugh gave excellent, well-received presentations. Though there is obviously room to improve, this second HYM was again a strong proof of concept, building effectively on the first event. 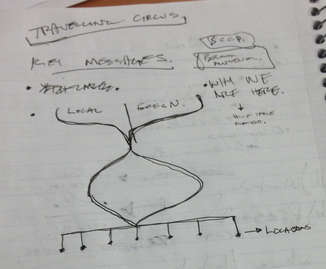 Outside of the programmatic value of the HYM, for me this has been a demonstration in practice of the value of Hive more broadly. Those people that I didn’t know when I sat down at the workshop last summer, I now consider my colleagues. As well as having observed how the Hive can add value to programming for teens across NYC, I have come to know what the Hive is myself, through the experience of participating, by doing. Maybe the Hive isn’t something you can explain in a sound bite? Just like learning to design a game, or making a video, maybe the Hive is an experience?

After two successful implementations of the model, one at Beam Center and another at the Hamilton Fish Recreation Center, we are ready to have a third one at Global Kids. We have seen the idea realized and made changes along the way. From idea, to design, to implementation, we have been testing a model that is shaping up to be successful. We hope that creating a space for young people to come together and recognize the opportunities available to them in the rich environment that is the Hive Learning Network continues to develop and becomes an on going event.
For another perspective by Chanell Hasty, read this.
Share: