by
Uncategorized
By Barry Joseph
Yesterday we held our second B-FAT meeting (Badge Advisory Team), the small internal group of senior staff that is overseeing and consulting on the GK badging process. It was quite an enlightening meeting. All sorts of interesting issues came to the surface, we affirmed out and refined our badging process, and developed an interesting badging framework we could now test out.

We started off sharing the results of our homework. First some staff “interviewed” their kids and spouses about the games they played and the badge-like features they encountered; we compare and contrasted that with our understanding of how our “badges for learning” plans related to game mechanics.

Next I shared the results of taking a random Letter of Recommendation and then color coding it for every mention of an accomplishment, hard skill, soft skills, knowledge, roll played, or program within which they participated. It was an unexpectedly rich vein. Thirty different mentions were identified. Noticing how well the categories worked, and wondering if every Letter would offer the same balance amongst them, led to lots of interesting conversation. It suggested that working with GK youth leaders to code dozens of other Letters will be a useful entry point for them to engage in developing the GK badges. It also suggested that these categories were more than conceptual – they easily lined up to what we think youth learn in our programs. We were on the right track. 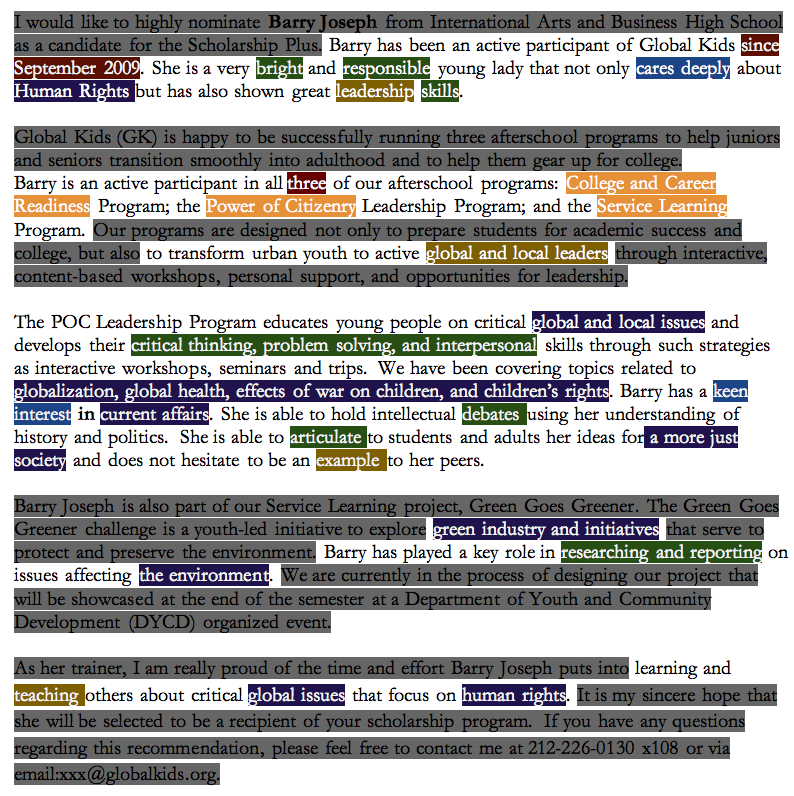 We played with a slogan or title for the program: Show What You Know, or SWYK! As in, “Oh, that’s SWYK” or “That’s SO SWYK”. The acronym is an odd one, so we played with SWAG for awhile: Show What you are Articulating to the General public? Showing What you Acquired through Global Kids? It just didn’t have the same flow. We’ll see…

We then moved on and spent the rest of our time with the third between-meeting task: building out from scratch a Google doc spreadsheet. Each tab in the sheet was one of the learning categories. We originally began with: knowledge, hard skills, roles, and soft skills. Activities was then added as well. It soon became clear that the list of knowledge areas was virtually endless – we tackle so many different topics in our programs – and could be allowed to grow over time. Yet, at the same time, we recognized we had created earlier in the year a group of 18 overarching topics that could shape the year’s programming (such as Structural Oppressions, Poverty, Globalization, Women’s Rights, etc.) and that this offered an excellent list from which to begin.

Hard skills, roles, and soft skills were fairly easy to identify. Hard skill – public speaking. Role – facilitator. Soft skill – develop supportive relationships with peers. “Activities,” however, posed a challenge. We realized that activities like “speaking to a public official” is not the learning itself, but the evidence of the learning. “Activities” were either evidence to be submitted for a badge, or the descriptions of a mission to earn a badge, e.g. “To earn your public advocate badge, speak to a public official about an issue of concern.” It felt right to remove it but, by doing so, we realized we were still losing something important – anything directly about being in a GK program, such as attending 10 sessions in a row, or completing the entire program. The same was true for the badging system – we needed a way to recognize the first time posting a comment within the system, and other desired activities within the badging system. So we removed “activities” and replaced it with “Participation.” That left us with the following badge categories:

This led us to discuss a wide-range of issues. Should some roles be leveled, e.g. Junior and Senior Peer Educator? How would adding levels increase work for both youth and staff? Other questions were raised as well, regarding how a badging system might affect our practices. Will badges draw attention to skill differentiation and, if so, will that support more effective collaboration or skill inequity? Will seeing others with harder to achieve badges cause “badge envy” and make a youth de-value their own achievements? Will youth get distracted by the final badge and not appreciate the process it takes to get there? Something these issues had in common is that badging was forcing us to deal in a concrete way with underlying educational issues and tensions that have otherwise remained under the surface. It is not new that some youth achieve at different rates within our program, or that they bring different skills to the table. Each trainer has their own individual practice for dealing with this when it becomes a problem, but usually these issues remain invisible. Badges will bring these issues to the surface in both a visible and measurable way.

Our next step was to figure out how they all fit together. Some badging systems develop themes, and then organize their badges by themes. We thought this would be a good place to start. After many years, we have developed a set of organizational Outcomes and Indicators. I had presumed this would be a valuable tool to suggest a structure to our badging system. To my surprise, I could not have been more wrong.

We wrote the five outcomes on the board and considered if they could each be applied as a distinct category of badges, summarizing them as:

However, when we tried to figure out which badges would go under which of the Outcomes, it was not always clear. We ended up getting into semantics that said more about the Outcome process than the badging system, and it just wasn’t useful. We tried to make columns, with the Outcomes at the top, each with it’s own set of badging types (knowledge, skills, etc.). It just wasn’t working, not the Outcomes or organizing them into separate themes. Debating whether a particular skill belonged in any particular theme just didn’t seem that useful, if it could be avoided. 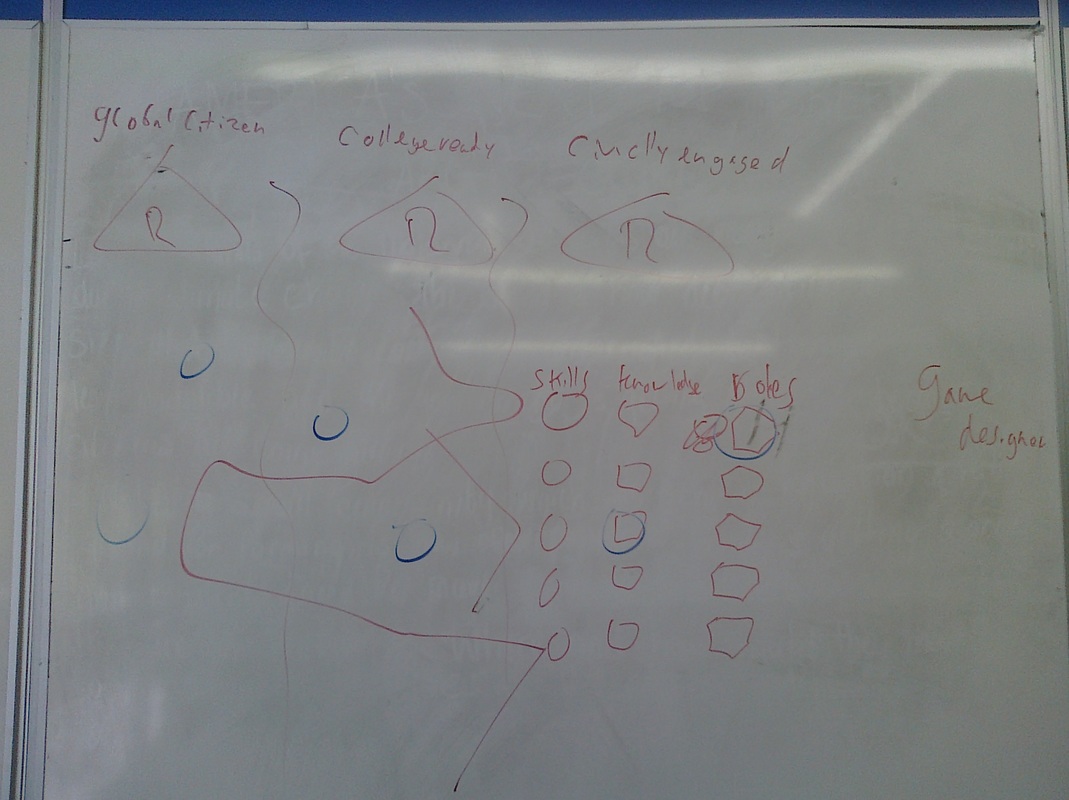 Meanwhile, we were recognizing that the “role” badges were different from the others. They could cut across the themes, building a unique path to a particular role. So we decided to flip around the X/Y axis, remove some constraint and see what we got: 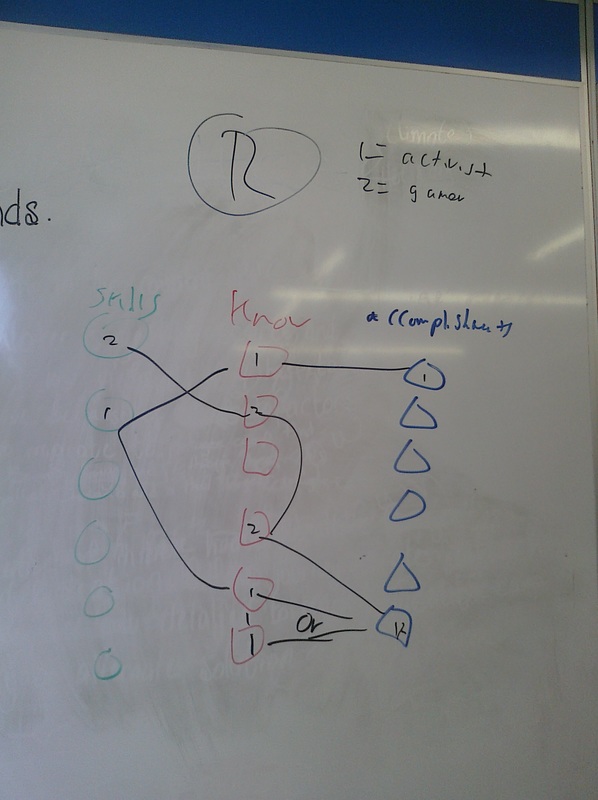 In this image, you can see the Role is now at the top, but not in a way that organizes the other badge categories. Rather, each “type of learning” badge category – which it turns out were much easier to define that the “type of content” badge categories – is simply listed in an endless vertical line, one line next to another: the knowledge badges, the hard skills badges, etc. Each badge has value in and of itself. But Roles are constructed across these badges and categories, perhaps with alternative routes to the same role. This felt like it was all coming together. This could work for the entire organization (Global Leader) and for particular programs (Game Designer). It was constrained and clearly defined, yet could easily grow and expand with the programs over time. We decided to play with distinguishing amongst Role Badges and Achievement Badges (all of the others).

We left the meeting excited with the progress. The homework before the next meeting:  flesh and further test out our badging framework by creating a clearer visualization – composed of Role Badges and Achievement Badges, along with Power-ups and Missions. Then create three different use cases, mapped atop the visualization, based on three of the Letter of Recommendations.